THE TWELVE STEPS OF ALCOHOLICS ANONYMOUS

STEP ONE:
"We admitted we were powerless over alcohol - that our lives had become unmanageable."

STEP TWO:
"Came to believe that a Power greater than ourselves could restore us to sanity."

STEP THREE:
"Made a decision to turn our will and our lives over to the care of God as we understood him"

STEP FOUR:
"Made a searching and fearless moral inventory of ourselves."

STEP FIVE:
"Admitted to God, to ourselves, and to another human  being the exact nature of our wrongs."

STEP SIX:
"Were entirely ready to have God remove all these defects of character."

STEP SEVEN:
"Humbly asked Him to remove our shortcomings."

STEP EIGHT:
"Made a list of all persons we had harmed, and became willing to make amends to them all."

STEP NINE:
"Made direct amends to such people wherever possible, except when to do so would injure them or others."

STEP TEN:
"Continued to take personal inventory and when we were wrong promptly admitted it."

STEP ELEVEN:
"Sought through prayer and meditation to improve our conscience contact with God as we understood him, praying only for knowledge of his will for us and the power to carry that out."

STEP TWELVE:
"Having had a spiritual awakening as a result of these steps, we tried to carry this message to alcoholics, and to practice these principles in all our affairs."

THE TWELVE TRADITIONS OF ALCOHOLICS ANONYMOUS

TRADITION TWO
"For our group purpose there is but one ultimate authority - a loving God as he may express himself in our group conscience.  Our leaders are but trusted servants; they do not govern."

TRADITION THREE
"The only requirement for A.A. membership is a desire to stop drinking."

TRADITION FOUR
"Each group should remain autonomous except in matters affecting other groups or A.A. as a whole."

TRADITION FIVE
"Each A.A. group has but one primary purpose - to carry the message to the alcoholic who still suffers."

TRADITION SIX
"An A.A. group ought never endorse, finance or lend the A.A. name to any facility or outside enterprise, lest problems of money, property, and prestige divert us from our primary purpose."

TRADITION SEVEN
"Every A.A. group ought to be fully self-supporting, declining outside contributions."

TRADITION NINE
"A.A., as such, ought never be organized, but we may create service boards or committees directly responsible to those they serve."

TRADITION TEN
"Alcoholics Anonymous has no opinion on outside issues; hence the A.A. name ought never be drawn into public controversy"

TRADITION ELEVEN
"Our public relations policy is based on attraction rather than promotion; we need always maintain personal anonymity at the level of press, radio, and films."

TRADITION TWELVE
"Anonymity is the spiritual foundation of all our traditions, ever reminding us to place principles before personalities."

THE TWELVE CONCEPTS OF ALCOHOLICS ANONYMOUS

The Twelve concepts for World Service were written by A.A.'s co-founder Bill W., and were adopted by the General Service Conference of Alcoholics Anonymous in 1962. The Concepts are an interpretation of A.A.'s world service structure as it emerged through A.A.'s early history and experience.  The short form of the Concepts reads:

CONCEPT ONE
Final responsibility and ultimate authority for A.A. world service should always reside in the collective conscience of our whole fellowship.

CONCEPT TWO
The General Service Conference of A.A. has become, for nearly every practical purpose, the active voice and the effective conscience of our whole society on its world affairs.

CONCEPT THREE
To insure effective leadership, we should endow each element of A.A. - the Conference, the General Service Board and its service corporations, staffs, committees, and executives - with a traditional "right of decision."

CONCEPT FOUR
At all responsible levels, we ought to maintain a traditional "Right of Participation," allowing a voting representation in reasonable proportion to the responsibility that each must discharge.

CONCEPT FIVE
Throughout our structure, a traditional "Right of Appeal" ought to prevail, so that minority opinion will be heard and personal grievances receive careful consideration.

CONCEPT SIX
The Conference recognizes that the chief initiative and active responsibility in most world service matters should be exercised by the trustee members of the Conference acting as the General Service Board.

CONCEPT SEVEN
The Charter and Bylaws of the General Service Board are legal instruments, empowering the trustees to manage and conduct world service affairs.  The Conference Charter is not a legal document; it relies upon tradition and the A.A. purse for final effectiveness.

CONCEPT EIGHT
The trustees are the principle planners and administrators of over-all policy and finance.  They have custodial oversight of the separately incorporated and constantly active services, exercising this through their ability to elect all the directors of these entities.

CONCEPT NINE
Good service leadership at all levels is indispensable for our future functioning and safety.  Primary world leadership, once exercised by the founders, must necessarily be assumed by the trustees.

CONCEPT TEN
Every service responsibility should be matched by an equal service authority, with the scope of such authority well defined.

CONCEPT ELEVEN
The trustees should always have the best possible committees, corporate service directors, executives, staffs, and consultants.  Composition, qualifications, induction procedures, and rights and duties will always be matters of serious concern.

CONCEPT TWELVE
The Conference shall observe the spirit of A.A. tradition, taking care that it never becomes the seat of perilous wealth of power; that sufficient operating funds and reserve be its prudent financial principle; that it place none of its members in a position of unqualified authority over others; that it reach all important decisions by discussion, vote, and, and whenever possible, substantial unanimity; that it s actions never be personally punitive nor an incitement to public controversy; that it never perform acts of government, that, like the Society it serves, it will always remain democratic in though and action.

"If we are painstaking about this phase of our development, we will be amazed before we are half way through.  We are going to know a new freedom and a new happiness.  We will not regret the past nor wish to shut the door on it.  We will comprehend the word serenity and we will know peace.  No matter how far down the scale we have gone, we will see how our experience can benefit others.  That feeling of uselessness and self-pity will disappear.  We will lose interest in selfish things and gain interest in our fellows.  Self-seeking will slip away.  Our whole attitude and outlook upon life will change.  Fear of people and of economic insecurity will leave us.  We will intuitively know how to handle situations which used to baffle us.  We will suddenly realize that God is doing for us what we could not do for ourselves.

Are these extravagant promises?  We think not.  They are being fulfilled among us - sometimes quickly, sometimes slowly. They will always materialize is we work for them."

"God, I offer myself to thee- to build with me and do with me as Thou wilt. Relieve me of the bondage of self, that I may better do Thy will. Take away my difficulties, that victory over them may bear witness to those I would help of Thy Power, Thy Love, and Thy Way of life. May I do Thy will always."

"My Creator, I am now willing that you should have all of me, good and bad. I pray that you now remove from me every single defect of character which stands in the way of my usefulness to you and my fellows.  Grant me strength, as I go out from here to do your bidding." 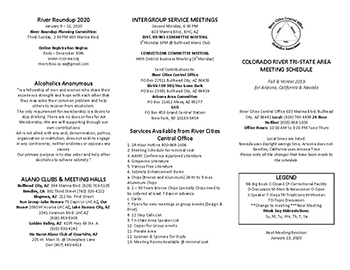 Download the AA Meeting App on your smart phone